Peter Lindbergh was a German fashion photographer and film director who sadly passed away a few days ago.

Lindbergh was behind the lens of some of fashion’s most legendary imagery, from capturing the ’90s supermodels as angels, to his signature black and white portraits.

In remembrance, we have collected an iconic collection of his best work and highlight his most memorable achievements.

Peter had studied arts in Berlin and Krefeld, and exhibited his works already before graduation, an elevated start for his career success.
As he continued to develop his portfolio, one theme which became apparent was his appreciation for black and white.
In a 2008 interview with art historian Charlotte Cotton, he explained why this was the case:
Using black-and-white photography was important to creating the supermodel.
… “Every time I tried to shoot them in colour because their beauty was close to perfection, it ended up looking like a bad cosmetics advert. With black and white, you can see who they are. It toned down the commercial interpretation that colour gives. What’s so striking about black and white is how it helps a sense of reality to come through.”

…All my love to you Cindy, 28 years of friendship! That is beautiful…like you are. Pete #Cindy50 #CindyCrawford #PeterLindbergh

He most recently worked for British “Vogue”‘s “Forces For Change” September issue.

This concluded his first cover for the magazine since the September 1992 issue and he worked with numerous talent including Meghan Markle, Adwoa Aboah and more.

"Being an advocate has transformed my life. It’s so cheesy to say, but I really feel like this is what I was meant to do." Adwoa Aboah, mental health campaigner and model #ForcesForChange #BritishVogue #AdwoahAboah #septemberissue

Lindbergh created in 1988 a series of portraits of new models together on a beach in Malibu, all dressed in white shirts and a natural look. At the time, big-makeup, big-hair studio shoots were rather in trend, so by taking his approach back to basics, he suddenly enabled the talent to appear more natural which successfully engaged with the millennial market.

However interestingly, The shoot had been commissioned by British Vogue magazine, but the clean look of the photos didn’t satisfy the editor at the time, and the pictures were tossed. Until Anna Wintour rediscovered the shots and hired Lindbergh for her first cover, the January 1990 issue.

Naomi Campbell, Linda Evangelista, Tatjana Patitz, Christy Turlington & Cindy Crawford, Watts Street (NYC), July 1989. Published as cover of Vogue UK January 1990. On view from September 10th @kunsthal Rotterdam and in @taschen book #aDifferentVisionOnFashionPhotography curated by @thierrymaximeloriot "For the legendary January 1990 Vogue UK cover, instead of selecting only one model, Lindbergh chose a group of five young models with different personalities—Linda Evangelista, Christy Turlington, Tatjana Patitz, Naomi Campbell and Cindy Crawford—together for the first time. This image was to become the birth certificate of “supermodeldom,” although Lindbergh himself considers the White Shirts image shot almost two years earlier to have been its real beginning. The Vogue UK cover was the image that defined the ’90s’ new identity: models who do not appear as mere objects, facing the viewer with confidence and pride that many could relate to. Lindbergh describes his inspiration thus: “I was rather uninspired with the way women were photographed in the ’80s. I was trying to photograph them in a different way, but nobody seemed to care back then… I wanted to move away from the rather formal, quite perfectly styled woman who was very artificial. I was more concerned about a more outspoken, adventurous woman in control of her life and not too concerned about her social status or emancipated by masculine protection. My ideal was always the young women I met in art school, very independent and who could speak for themselves. The supermodels represented this change. It explains why they dominated the visual world for many years." Pop singer George Michael saw Lindbergh’s famous Vogue cover and immediately booked the five girls for the video of his new single “Freedom ’90”, directed by David Fincher, in which they lip-synched the song. #Supermodels #NaomiCampbell #LindaEvangelista #TatjanaPatitz #ChristyTurlington #CindyCrawford @britishvogue @ozwolf @hairbychristiaan @moyramulholland #KunsthalRotterdam #PeterLindbergh @gagosiangallery @2bmanagement

Simon Jacquemus recently invited fashion’s elite to visit his anniversary show discovered in the heart of a lavender field to celebrate 10 years of his brand. The French designer from Marseille is once again showing his strong ties to the […] 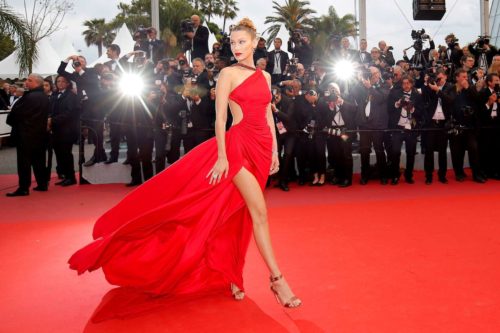 The prestigious annual Cannes Film Festival is underway, and we couldn’t help but notice the array of talent who showcased their breathtaking looks. For this 72nd edition of the Cannes Film Festival, Actors and Actresses, Models and Artists have reunited […]