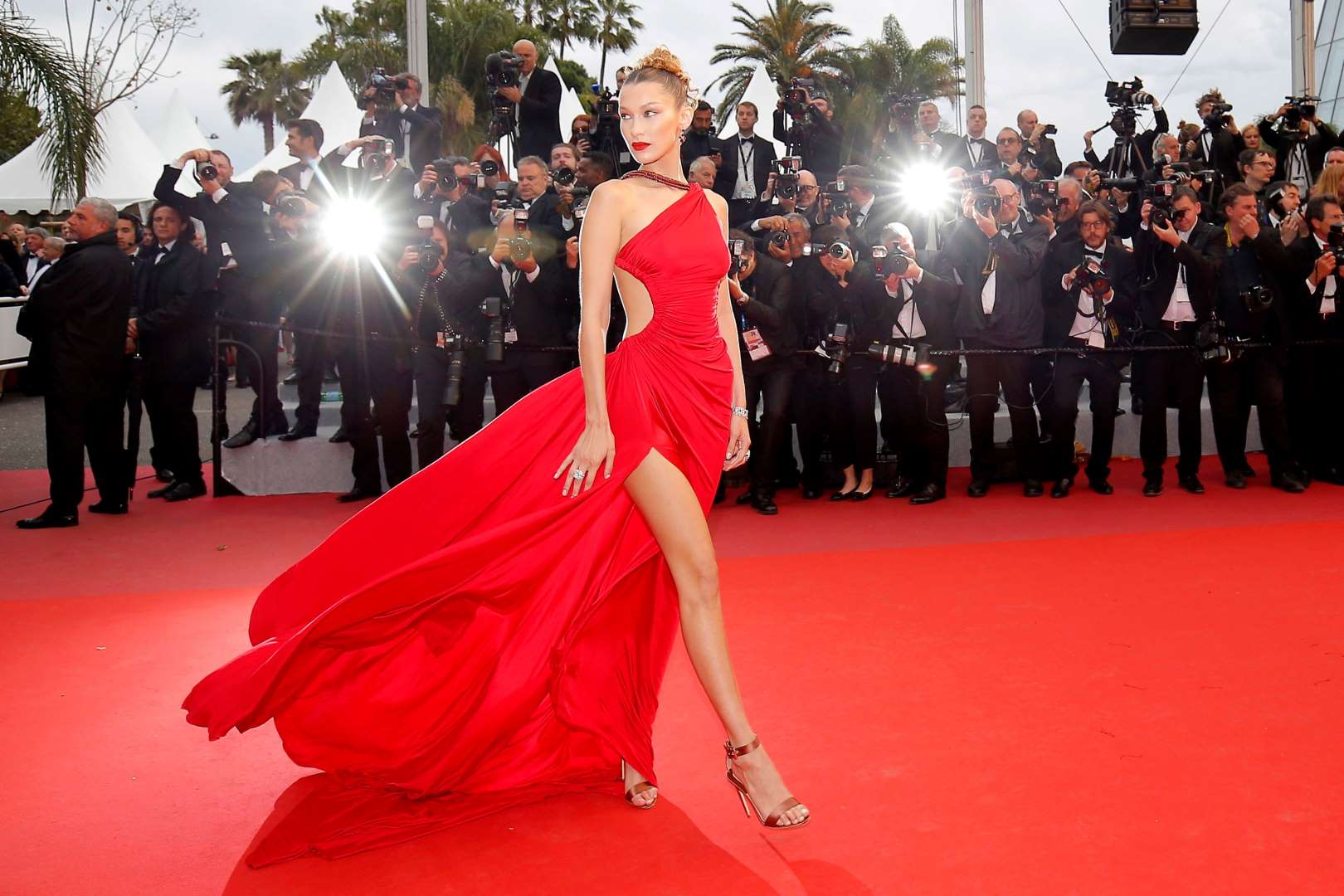 The prestigious annual Cannes Film Festival is underway, and we couldn’t help but notice the array of talent who showcased their breathtaking looks.

For this 72nd edition of the Cannes Film Festival, Actors and Actresses, Models and Artists have reunited to celebrate cinema around the globe, and fashion! Because what would be the Cannes Film festival without the mythical red carpet?

This year, again, the red-carpet looks have left us speechless. Sparkles, couture dresses and outstanding beauty looks, the carpet was as flamboyant as ever.

Continue reading to find out more about the unmissable fashion moments from Cannes Film Festival 2019.

Since Bella’s 2016 walk of “les marches” in a red Alexandre Vauthier dress it has become a tradition for her to wear red in Cannes. So, whilst she may change her designer, hair, makeup and jewelry of choice every year, the color remains as her signature look.

This year she dazzled us with her Roberto Cavalli look which was an asymmetrical design featuring a jeweled neckline and cutouts, she then paired the dress with rubies earrings and a red lip, showing her consistent color co-ordination throughout.

This look was very contrasted from her red-carpet debut this year in Cannes. She wore a white tulle Dior haute couture dress, with an asymmetric neckline. She might have looked like an angel for her debut, but her legendary Hadid twist was back in the Vauthier dress.

ESLA HOSK – A RAINBOW OF COLOUR

This year, the Victoria Secret model attended the screening of the ‘A Hidden Life’ in a pastel chiffon dress by ETRO.

The multi-colored dress featured hints of pink, blue, green and purple which wrapped around a deep V neck and belted waist design. Her hypnotizing look consequently brought a ray of sunshine to the otherwise bleak weather scheme which unfortunately adorned the French Riviera this season.

Angelic beauty #ElsaHosk makes her first appearance at the 72nd Cannes Film Festival in a custom-made #Etro chiffon fairy-tale gown in rainbow-inspired sorbet shades with a long train, for the screening of ‘A Hidden Life’ by Terrence Malick. #EtroInCannes #EtroEverywhere #EtroCelebs #Cannes2019

The award-winning actress was resplendent when she walked the steps again this year to present Pedro Almodovar’s film ‘Dolor y Gloria’.

In her second homage to Karl Lagerfeld, she chose to walk in a magnificent dress from his last couture collection, a white and blue lace gown reminiscent of her Spanish nationality.

Her continued dedication and respect for her designer of choice follows from her runway debut for the Chanel AW19 show, which included a one-minute silence before the start, a moment to show reflect on the 36 years of service Karl Lagerfeld devoted to the fashion house.

For the opening ceremony on the 72nd festival, the youngest member of the jury, Elle Fanning this year opted for a stunning Gucci dress.

She chose a peach, silk dress with structured shoulders and a cape, the dress was decorated of an embroidered of a purple flower. Additionally, she completed her look with precious Chopard earrings, reflecting both her youth and maturity as an actress.

@ellefanning wore a custom #Gucci soft pink silk gown with cape, purple and ivory floral embroidery at the waist by @alessandro_michele to the Opening Ceremony of the 72nd annual @festivaldecannes at Palais des Festivals.

Peter Lindbergh was a German fashion photographer and film director who sadly passed away a few days ago. Lindbergh was behind the lens of some of fashion’s most legendary imagery, from capturing the ’90s supermodels as angels, to his signature […]

Simon Jacquemus recently invited fashion’s elite to visit his anniversary show discovered in the heart of a lavender field to celebrate 10 years of his brand. The French designer from Marseille is once again showing his strong ties to the […]